Craving some delicious comfort food? Try the flavorful taste of the Mediterranean with this amazing Moussaka recipe that you won’t be able to get enough of!

This authentic dish is the Greek version of lasagna, which has all the good things except the pasta. In just one bite, you’ll be able to taste the generations of love that went into this delicious national specialty!

If you’re looking for the most authentic Moussaka recipe, this one is it!

Wondering what Moussaka is? Moussaka is a Greek casserole dish made of layers of sautéed or fried eggplant and meat, topped with a bechamel sauce and baked until bubbly. It’s the ultimate Greek comfort food!

Few Greek dishes can come close to the fame of this fantastic and rich casserole. You will find it in every family cookbook, and there isn’t a restaurant that doesn’t serve this famous specialty!

The secret of the taste lies in the quality of your ingredients. Ingredients should be fresh, accessible and authentic!

The eggplants (aubergines) and potatoes are the groundwork of a Greek Moussaka, and they fill two altogether different needs. The cut potatoes are the base for the dish, give it vigor and make it simple to cut and serve.

Then again, the aubergines carry on like little wipes. They absorb the heavenly pureed tomatoes and give the dish unbelievable succulence and smoothness.

Using the best olive oil and the freshest herbs gives you the most fantastic result. What comes out in the end—are slices of heaven!

That is why this recipe is an absolute winner! This will probably become your favorite food, and it is definitely a must-try! 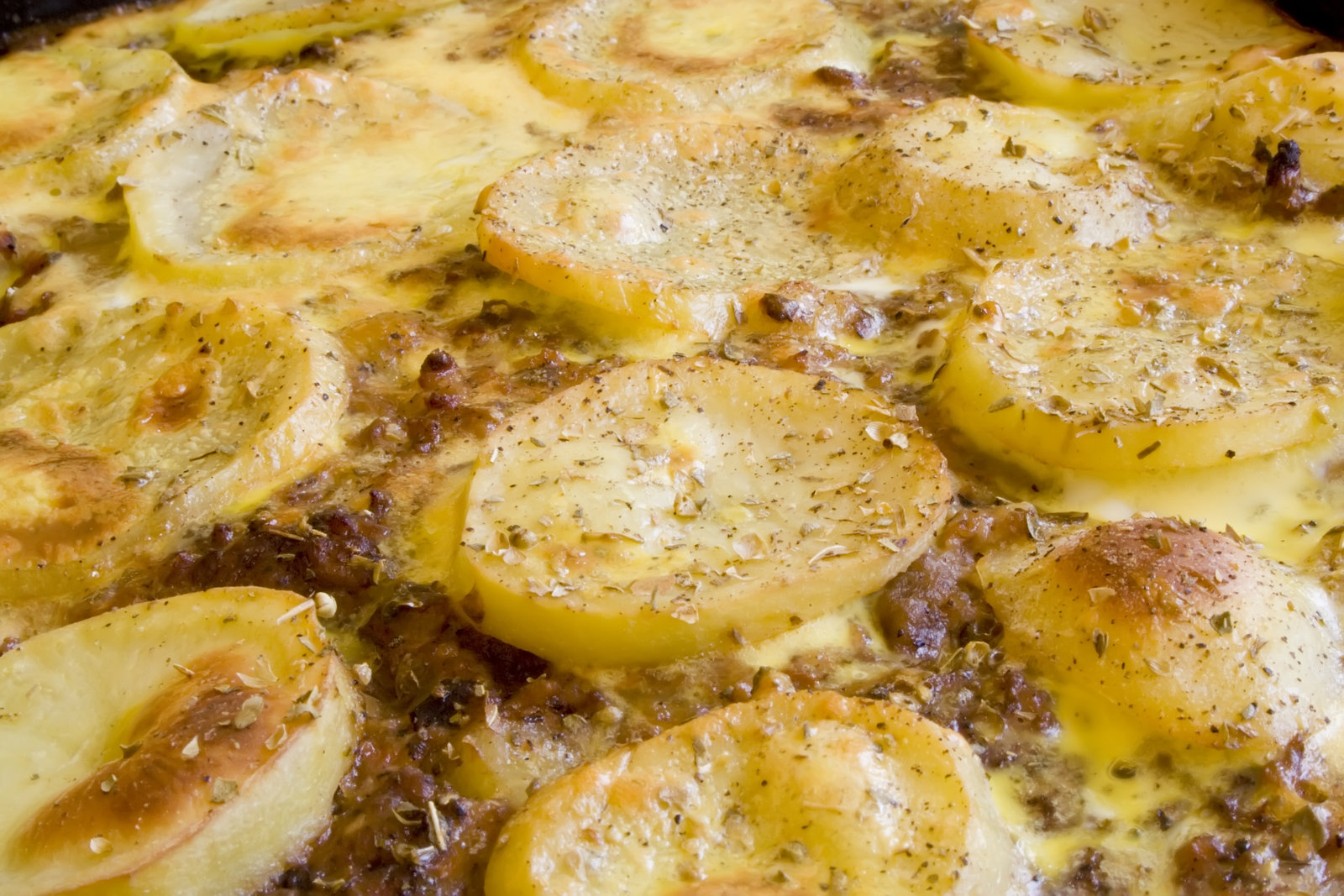 Moussaka is a staple of Greek cuisine, and one could argue there is nothing better than this homemade dish. However, was it originally Greek, or did the Greek diaspora propagate the dish?

In modern times, Moussaka is one of the most famous Greek foods, alongside gyros and souvlaki; however, it is also found in the Balkans and Turkey, but their version does not include layers and includes minced beef.

In spite of the fact that the origins of Moussaka are unknown, it is widely believed that the Arabs introduced the dish by bringing eggplant into the area.

This is since food historians discovered a recipe for Moussaka’s ancestor in a medieval Arabic cookbook called A Baghdad Cookery Book.

In 1920, after a century of Ottoman occupation, France-educated Nikos Tselementes, a Greek chef from Sifnos, was known for his modernization of Greek cuisine by “cleansing” it of Turkish influence.

He tried to Europeanize Moussaka by incorporating béchamel sauce into it.

As a result, Moussaka, as it is known today, has been modernized into a European-inspired version of a dish originally from the Middle East. What a surprise!

There is a common misconception that Moussaka is difficult to make. But in reality, it is very simple. Make your Moussaka by following these steps!

This is the classic Greek Moussaka recipe, and it’s absolutely delicious!

For the béchamel sauce 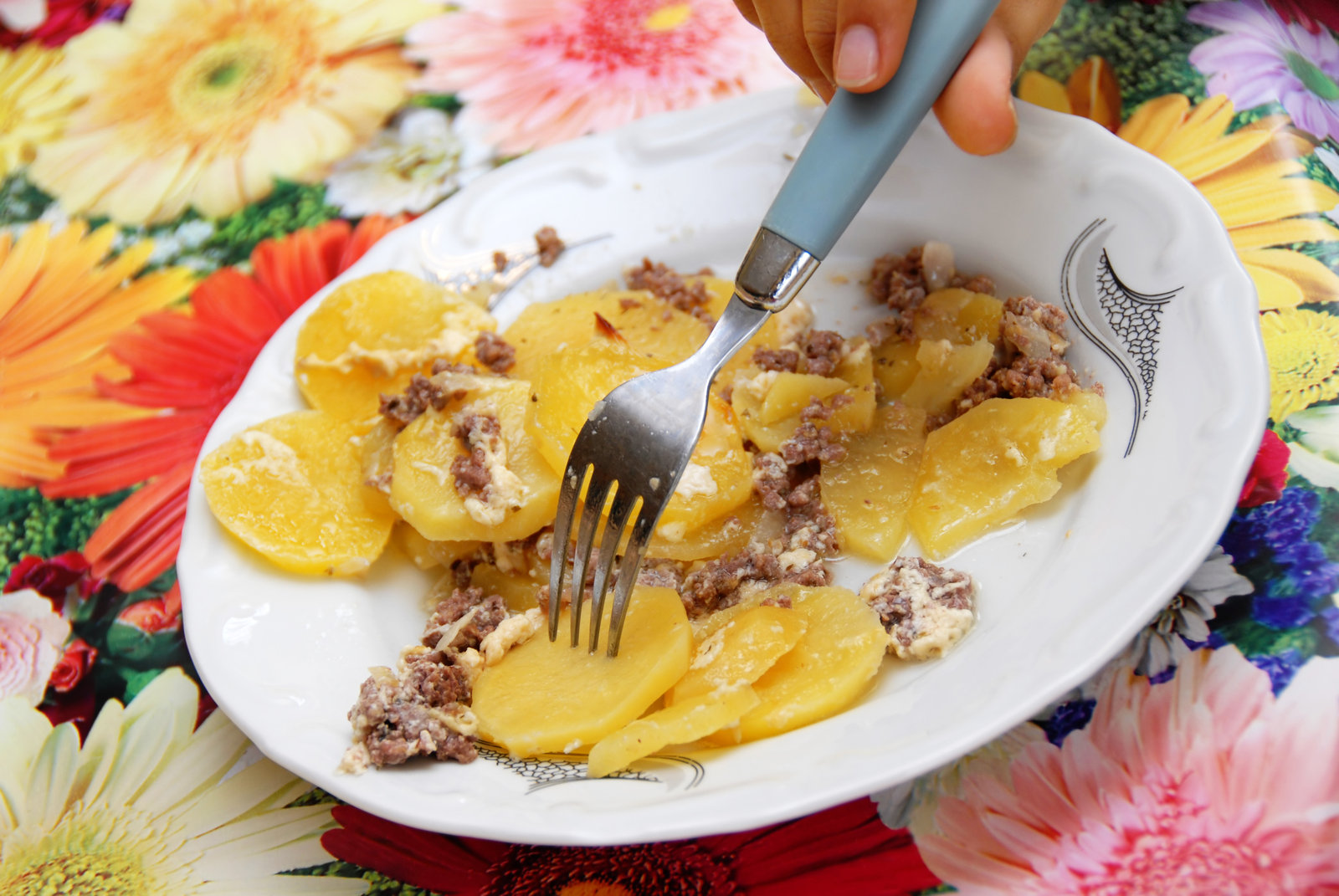 Get your hands on some starchy potatoes like Russets, Idahos, Yukon golds or Marris Pipers.

Prepare them by peeling and slicing them into uniform disks about the same size as your little finger (about 1 cm).

Let them run under some water once more to remove any remaining starch.

The next step is to get the largest eggplants from the supermarket—the bigger, the better!

Do as you would with the potatoes previously and slice them, unpeeled, into disks with a similar thickness as the potatoes.

Ensure they’re thoroughly rinsed with water and season them with salt afterward. After that, place them in a colander for 30 minutes.

This helps the eggplants lose some bitterness, which is essential!

Traditionally, the eggplants and potatoes used for the Mousaka base are shallow fried until they turn brown and crispy. You will also find that this is also how most restaurants cook their Moussaka because shallow frying lends the dish an incredible lusciousness that is hard to resist.

However, if you prefer a lighter Moussaka that is not too greasy and oily, just bake the aubergines and potatoes instead.

You will have lighter, healthier Moussaka that is lower in calories and tastes just as delicious!

Simply drizzle olive oil over your sliced potatoes and aubergines, season with salt and pepper, and bake in a sheet pan at 180C/350F for 20 minutes until they are half-cooked and brown.

Garlic, onions and olive oil are used to sauté the ground meat. Afterward, it is deglazed with some red wine, minced tomatoes and tomato puree are added at the end to thicken it, as this sauce needs to be very thick to stay on top of the vegetables and not leak through.

The sauce will reduce and thicken as it simmers once you have added the spices like the cinnamon, oregano and bay leaves. Be sure to stir it occasionally to avoid it sticking to the bottom.

The Moussaka sauce should be seasoned with salt and pepper at the end. Taste, add some more if necessary, and stir again!

The first step in making your bechamel sauce is to melt your butter on high heat. All flour should be added, then whisked until the butter is absorbed and the mixture has slightly browned. Next, stir in the milk a little at a time, lowering the heat to medium.

Slowly pour in the rest of the milk as it absorbs into the flour while whisking simultaneously. Ensure that your bechamel is cooked long enough to form a thick custard.

Your béchamel is now ready for seasonings and enrichment. Add two teaspoons of salt, nutmeg and cheese after removing the pan from the stove.

Whisk it all until it combines, and add any additional seasoning if needed.

Last but not least, add the egg yolks and whisk, so they are fully incorporated into the mixture.

Now that all of your primary parts of this dish are prepared, it’s time to assemble everything! Grab your deepest baking dish and start to layer your potatoes first.

Spread half of the aubergines on top and keep half of them for later on.

Finally, pour the bechamel sauce on top of everything!

To give it some extra texture and flavor spread some grated cheese over the béchamel. After you take the Moussaka out of the oven, the melted cheese will give it a delicious golden brown color and amazing taste!

After you’ve finished assembling just pop it in the oven for about 1 hour at 180C/350F. 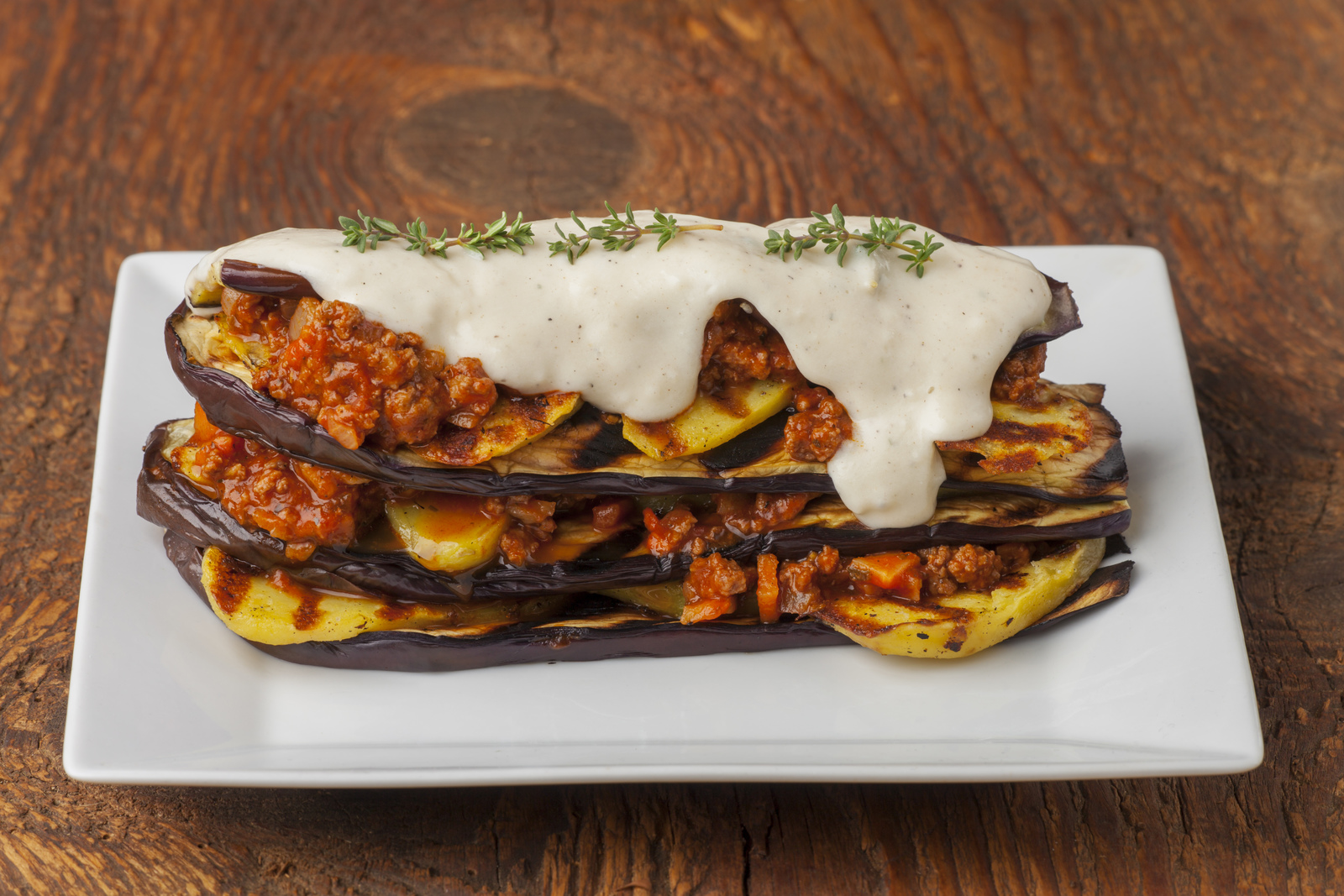