Even if you haven’t tried it, you’ve probably heard of it, or at least seen a picture of it. Štruklji is a Slovenian dish that comes in many different versions, from sweet to savory. The dough can be made with or without eggs, depending on the struklji recipe.

Besides flour for dusting, you’ll need a rolling pin and work surface and the filling you choose.

Something is comforting about this recipe that will bring back memories of Eastern European cuisine.

The Štruklji dish is popular in Slovenia, but can also be found in many other parts of Europe. As a result, the pronunciation and variations vary from country to country.

The dish is one of the most common Slovenian dishes, consisting of various types of rolled dough filled with savory or sweet ingredients, including cottage cheese, walnuts, apples, and poppy seeds.

Throughout Slovenia, you will find them in home kitchens, restaurants and numerous mountain huts.

Štruklji can be baked or cooked, and one type of the dish is especially popular during spring and summer when tarragon is baked into the Štruklji.

Originally, Štruklji originated in Yugoslavia when Carniolan and Styrian peasants brought it to their gatherings to celebrate the end of their exhausting work on their farms.

In the beginning, they used cottage cheese, which they produced themselves, eggs and wheat flour. However, the availability of Štruklji increased after the Second World War and it became a common meal component.

If you serve this Slovenian side dish to your friends and family, they will surely rave about it.

This dish will impress you when you try it first because the topping is (naturally) modestly sweet because cottage cheese and sour cream are used.

A properly baked filo pastry holds its shape, holds up to the topping, and cooks beautifully. It is easy to make, offers many options for serving (as a side dish or dessert), and is enjoyed by both adults and kids. You can purchase filo pastry at the grocery store or make it at home.

Below are the Ingredients and Step-By-Step Instructions for the cheese Štruklj recipe and also for the Apple Štruklji recipe. Enjoy! 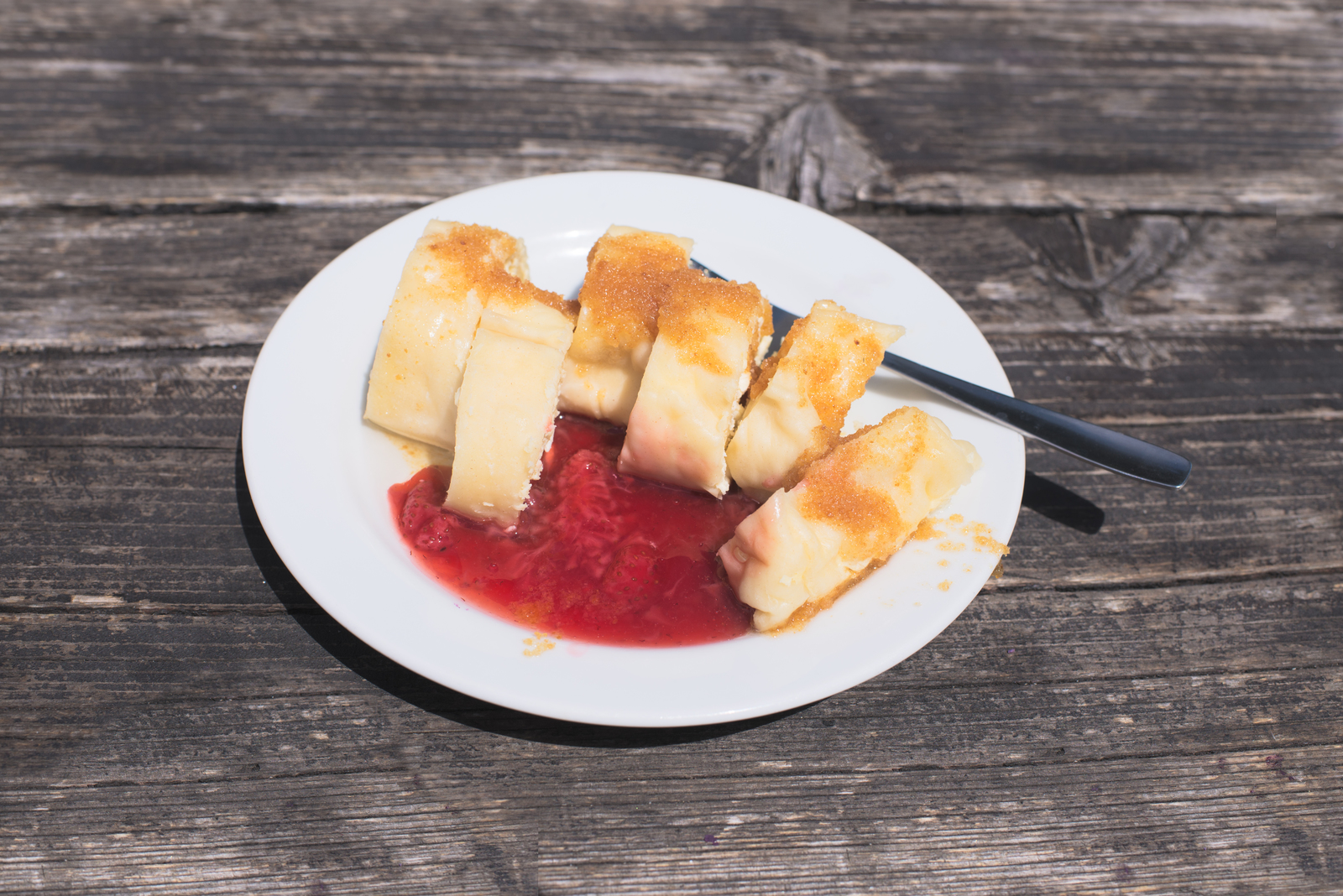 Melt the butter in the hot water in a small bowl and add it to the hot water to make the dough. Mix in the egg and salt with a fork.

Separate the flour into a separate bowl. Fill the well in the flour with the liquid mixture.

Make the dough smooth and elastic by blending and kneading it. Keep it at room temperature for 30 minutes.

While you wait, prepare the filling by melting butter in an 8-inch saucepan and browning bread crumbs in it.

Next, place the eggs in the pan, remove them from the heat, and stir until they are scrambled.

Mix the cottage cheese with the sour cream, parsley and salt in a mixing bowl. Stir in the egg mixture until well combined.

Roll out the dough into an 18-inch by 12-inch rectangle on a lightly floured surface. As you would with a jelly roll, begin rolling the dough from the long side into a tight roll.

The roll should be placed on a white cloth or a double-thick cheesecloth large enough to cover it. The cloth should be wrapped around the roll and tied with a string like a sausage.

Roll the dough into a circle and drop it into a large pot of boiling salted water. Let it simmer for 40 minutes, then carefully remove it from the pot. Discard the wrapping and keep the roll warm.

Butter should be heated until the bread crumbs start to brown. The struklji should be sliced 2 inches thick and topped with buttered breadcrumbs. 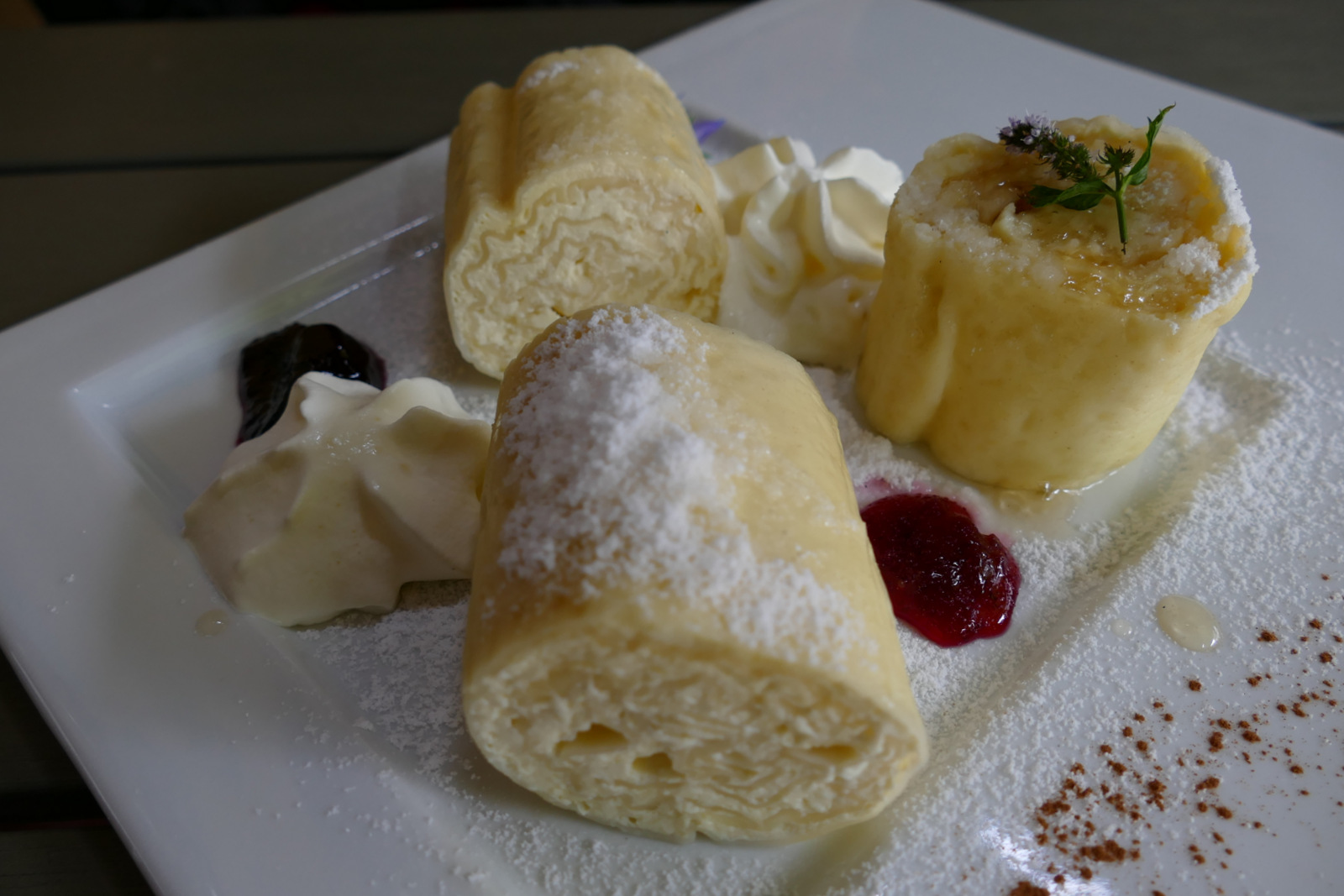 Apples should be peeled and cored, and the flesh should be diced into small pieces. Cook for around 5 minutes over medium heat with the lemon juice, sugar, spices, and chopped prunes (or raisins), until soft.

In the meantime, prepare a damp tea towel on which to place a piece of filo pastry. Lightly spray the pastry with oil, and place another sheet on top. Continue until you’ve used all the pastry.

Roll the pastry tightly, starting at one of the short ends of the rectangle. Using the tea towel, tightly wrap the pastry roll and tie the ends.

The water should be brought to a boil before adding the roll. Boil for approximately 30 minutes before draining. Cut the string and unwrap the tea towel once it has cooled enough to handle.

Using a sharp knife, cut the štruklji into slices, then top with icing sugar.

The homemade Cheese Dumplings can be kept in the fridge for up to 3 days. Pour one inch of water into a pot before serving.

Cook the dumplings until they are warm. If you wish, you can reheat them in a bowl placed over a pot of boiling water.

The štruklji can be served as a savory side dish with various main dishes or as a dessert with whipped cream and toasted breadcrumbs.

These can be served with thinly sliced round steaks in a creamy sauce, creamed mushroom chicken, pork tenderloin in prosciutto with beans or simple chicken paprikash.