Goulash (also known as Gulaš) is one of the most popular comfort foods in the Balkans. However, if prepared the traditional way, this dish requires a few ingredients and hours of preparation since, in the Balkans, “low and slow” is the rule for cooking goulash. This article will show you a Goulash recipe you can do at home – low and slow.

There is no doubt that warmer comfort food delights are popping up all over the place as autumn approaches. We love eating authentic Serbian goulash as one of our favorite comfort foods. Today we will share with you the steps involved in creating an extremely flavorful meal! 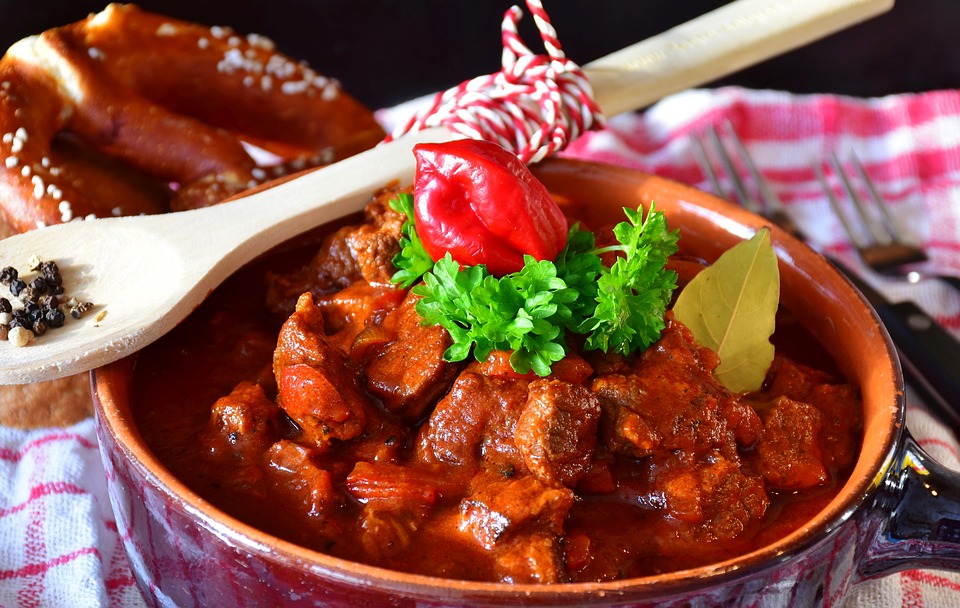 One of Serbian cuisine’s most popular dishes is goulash, a meat and vegetable stew. It differs from Hungarian goulash in that it is a thick dish that is slowly cooked over low heat to obtain its delicious taste and aroma.

A good goulash can easily hold its own against any great stew, such as barbacoa and pot roast. It is sometimes called paprika beef stew, but it is more like a soup than a stew.

The origins of Goulash go back to the 9th century when it was used to prepare thick stew-like dishes with vegetables, meat and various spices such as paprika. Hungarians are the original creators of this recipe; Hungary is a small country in Central Europe near Serbia.

Since then, it has been adopted by many cultures, and today is a popular meal throughout Central and Eastern Europe. In spite of its similar texture, this hearty meal has a distinctly different taste and appearance in Serbia.

The Austro-Hungarians brought this dish to the Balkans. As a result, both Balkan and Hungarian versions of the Goulash recipe are similar. Imagine it as an old-fashioned goulash. 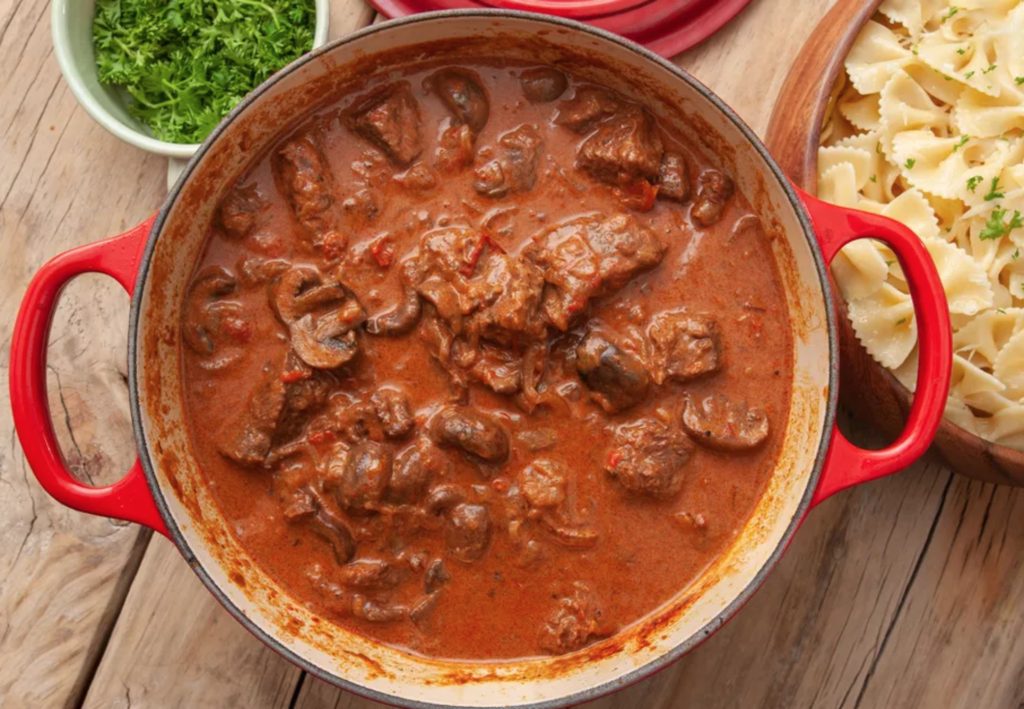 The ingredients of Serbian goulash are somewhat more straightforward, but when they are prepared correctly, they produce a dish with complex aromas and flavors. Creating this comfort food delight is the perfect combination of a few ingredients.

From your knowledge of traditional Serbian food, you’ll probably be aware that this version of goulash includes more meat than any version of the dish that you may have tasted before. Serbians love their meat-filled meals, and Goulash is no exception.

You can forget about excessive vegetables; what you need is meat, onions and spices, served with creamy mashed potatoes.

The recipe below outlines one way you can make goulash; it’s straightforward and easy to follow!

Make sure to trim excess fat tissue from the meat before cutting it into 1 inch cubes. You should always cut the meat against the grain to shorten the muscle fibers, resulting in easier chewing.

There must be at least 50% of the meat’s weight in onions in the recipe. It is better to have more than 50%, but it should not be less than 50%.

Spread the chopped onions evenly over the bottom of a heavy large pot and coat it with olive oil. Add the cubed meat on top. Turn the heat to medium-high (8 out of 10) and cook the pot without stirring for 15 minutes.

Stir the mixture with a wooden spoon with a flat bottom. Place a lid on the pot and let it simmer for 15–25 minutes. You may need to add about 1/2 cup of stock before covering the pot if it is dry.

As you finish this phase, the meat should start sticking to the pot bottom and fond should start forming. From there, you can decide whether to cook for 15 or 25 minutes. Watch it closely to prevent overcooking.

Add about 1 cup of stock to the mixture and stir. Reduce heat to medium-low (2 of 10) and simmer for another 130 minutes after deglazing the bottom. Adding beef stock incrementally to maintain the proper moisture level should be done every 15–20 minutes.

You don’t want to flood the goulash with stock all at once! Keep adding a little stock whenever necessary. The meat pieces should be submerged in liquid 60–70 percent of the time.

Adjust the seasoning as needed after tasting the goulash. You should not skip this step! There is a fair amount of sweet onions and meat in the dish and you will probably need more salt than you would think. 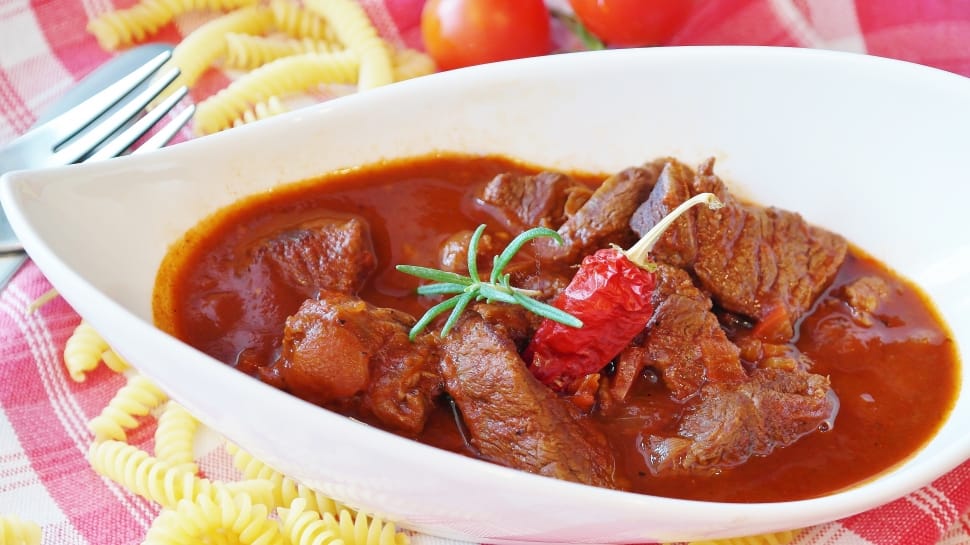 The right side dish can make a goulash even more delicious. These side dishes need to be flavorful, but they should not overshadow the flavor of the main dish.

What side dishes should you serve with your goulash?

When serving goulash that has a mild flavor, you may wish to serve it with a hearty and bold side dish.

Try potato pancakes. Goulash can be enhanced with these savory pancakes, which can add an extra dimension to your meal.

As a rule, if you plan to serve goulash with a spicy flavor, be sure to choose a mild-tasting side dish.

Therefore, you may want to choose a side dish that serves as a neutralizer.

Mashed potatoes are a good example of this.

Creamy Buttery Mashed Potato is perfect for goulash because the gravy helps flavor the potatoes themselves, mashed potatoes pair exceptionally well with a sauce base.

Roasted brussels sprouts and spiced carrots are fantastic side dishes for goulash if you want something lighter in terms of calories.

The Spaetzle is a type of dough dumpling that is eaten in several European countries, including Hungary. They go well with sauces of any kind. With a sauce base, they might even work better than potato pancakes.

A side dish like Cabbage Rolls with Sour Cream sauce is also a solid choice to serve with goulash.