When you are visiting any place in the Balkans and looking for a sweet treat to enjoy with your coffee or tea, stop by any candy shop and ask for a piece of Lokum! The owners don’t give out their lokum recipe, but we will give ours!

The soft squishy texture of Turkish delight will melt in your mouth, releasing the delightful sweetness of this classic dessert. It is a favorite candy in the Middle East and even the Balkans!

This classic treat is made from simple ingredients and then dusted with powdered sugar to keep it from sticking together. And if you’re nowhere near Turkey but still want to taste this Middle Eastern treat, don’t worry; I’ve got you covered!

With just a few simple ingredients, you can create soft and chewy cubes of Lokum in your own kitchen with this traditional recipe!

It is remarkably easy to make and tastes just like traditional Lokum.

Lokum is a sweet, chewy, squishy treat made with a mixture of starch and sugar, cooked together to form a paste. The most popular and traditional flavor of Lokum is rosewater, but it can also be made with orange blossom water or lemon.

You can also add a layer of pistachio nuts or chopped dates to the center of the candy before the cooking process.

The texture of the lokum, once it is cooked, is slightly squishy and chewy like gumdrops, but also very sweet due to its high sugar content. Lokum is served in little cubes coated with confectioner’s sugar or cream of tartar—to keep them from sticking together after preparation.

Originating from the Middle East as an exotic Arabian treat, Lokum is a traditional Turkish delight that is easy to make at home. However, it is also highly popular in the Balkans, Siria, Tunisia, Saudi Arabia, and Egypt!

With a few common ingredients and a little time, you can make your own wonderful treats at home! These little bites are fun to make, but they are also delicious!

So, do you want to bake a delicious lokum at home? Keep on reading to get a taste of this traditional Turkish candy! 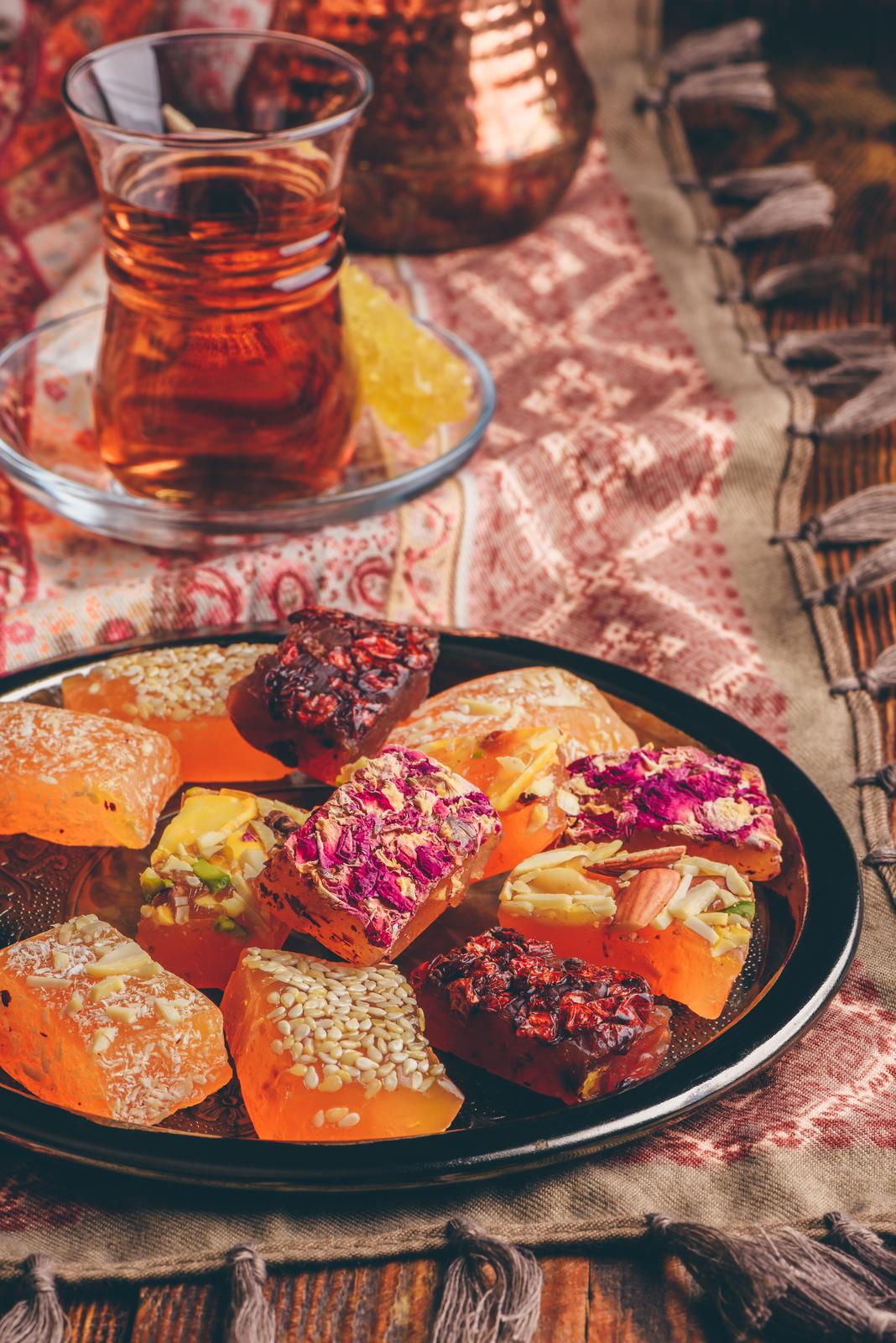 The Turkish Delight, also known as Lokum, has been around since the 16th century, and we trace back its origin to the Ottoman Empire, or as we know it today—Turkey.

With a history dating back almost 500 years, the Turkish Delight recipe has remained almost unchanged since its creation.

According to the story, the Sultan asked his confectionery chefs to create an original dessert to cope with all his mistresses. This was how the Turkish Delight came to be!

During the rule of Sultan Abdul Hamid I, Bekir Efendi, a fully apprenticed confectioner, arrived in Istanbul in 1777. According to another theory, Bekir Efendi was the one to invent Turkish Delight and then put up a shop in the city center.

A sweet tooth’s favorite treat, Turkish Delight, was wrapped up in stylish lace handkerchiefs and quickly became a fashionable gift.

A British traveler introduced Lokum to Europe in the 19th century, who liked the confection and sold it in Britain as “Turkish Delight.”

Today in Turkey, Lokum is served as a dessert during traditional coffee breaks. And if you visit Turkey and enjoy their signature cuisine, you’ll be offered this highly addictive treat, too! 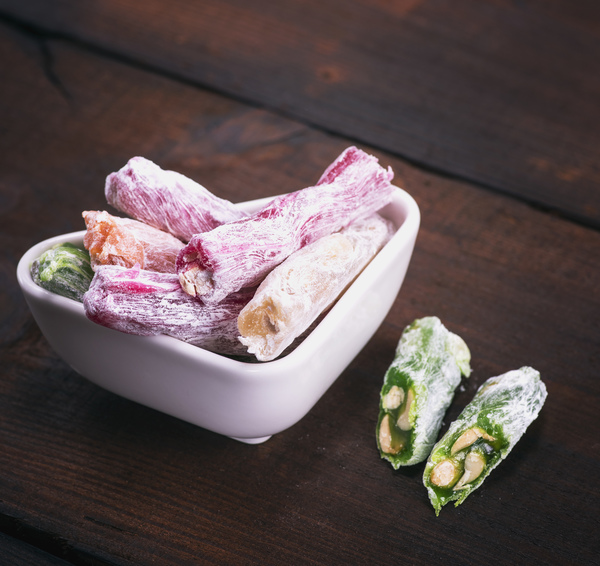 Prepare a 9-inch baking pan by buttering the sides and bottom. Put the waxed paper on the surface, and grease it as well.

Grab a saucepan, and pour 1 ½ cups of water inside. Add the granulated sugar and lemon juice, and leave the saucepan to boil over medium heat.

Make sure you constantly stir until the sugar dissolves.

Stir the mixture for several minutes until it starts to boil, then turn the heat down to low and let it simmer until it reaches 240 F on a candy thermometer.

Take the mixture off the heat and let it cool.

Pour the remaining 2 3/4 cups of water into a separate pot, then add 1 cup of cornstarch and 1 cup of cream of tartar. Set the saucepan on medium heat.

Stir the mixture until all lumps have disappeared and it starts to boil. Let it cool and stop stirring when it is the consistency of glue.​

Pour the mixture of sugar and lemon juice into the cornstarch. Stir the mixture continuously for 5 minutes, and bring it over medium heat to simmer for 1 hour while stirring often.

When the mixture has turned golden, it’s time to add flavor by pouring and stirring in the rose water.

Grab the pan you first prepared, and pour the mixture inside. Make sure to spread it evenly and set it aside to allow it to cool overnight.

The next day, take the big candy bar out by placing the pan turned over on a clean countertop.

Remove the waxed paper from the baking pan, and using an oil-coated knife, cut the candy into 1-inch pieces.

Toss the cubes of Lokum in the bowl with the sugar mixture to coat each bite evenly!

Store in a container between waxed or parchment paper layers, or serve immediately! Just make sure your container is not airtight because that can cause sweating. 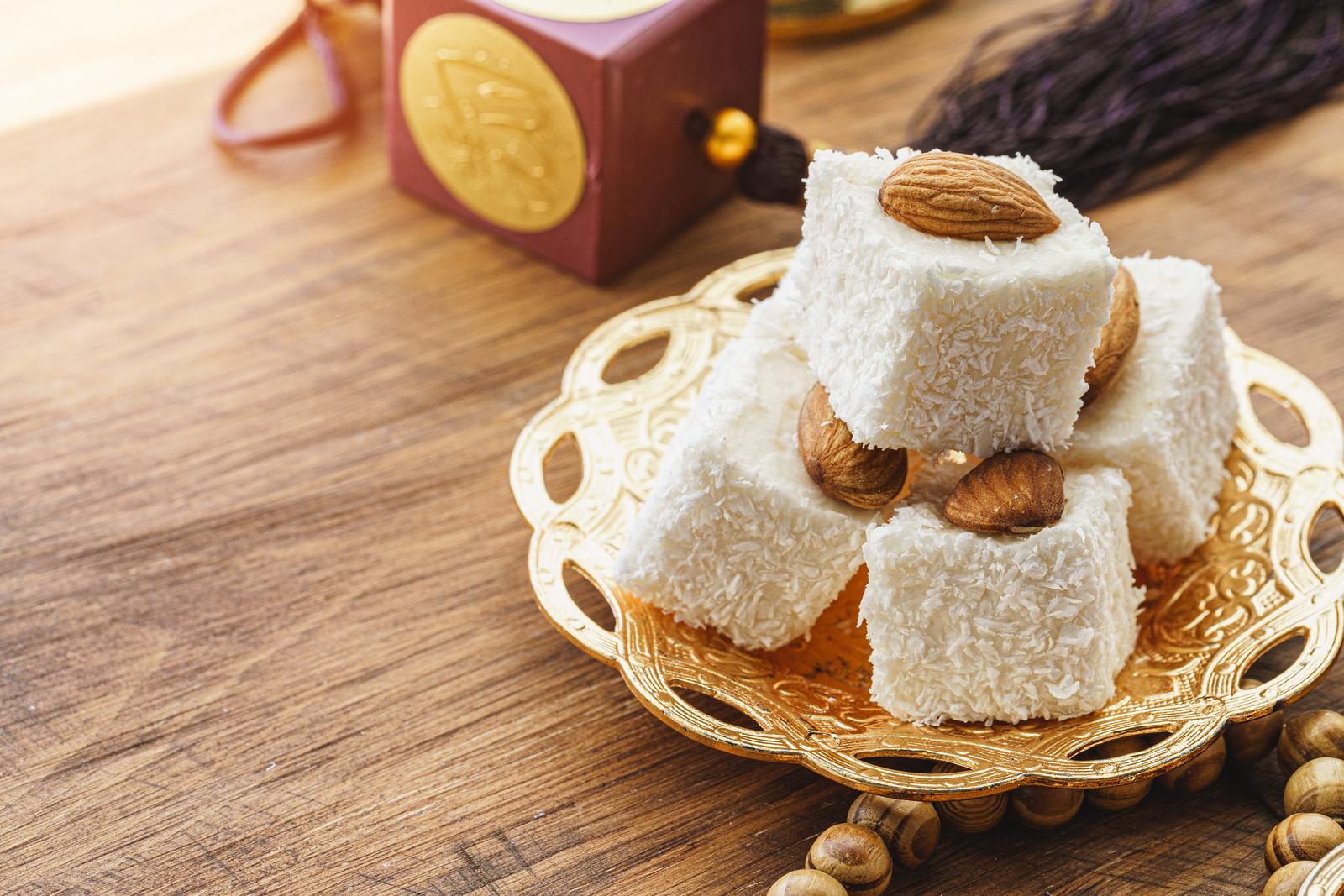 And just like that, your homemade Lokum is done! This lokum recipe for the Turkish Delight is a classic one that is incredibly easy to make.

If you prefer, you can also add nuts on the inside of your Lokum while cooking it or just garnish in the end before serving.

Sprinkle some pistachios on your plate and get a crunchy and soft, irresistible texture!

I also recommend enjoying Lokum alongside Turkish coffee or Turkish tea—just like you would find it in any Turkish home or cafe!