The traditional Macedonian dish, Tavce Gravce, consists of a baked mixture of kidney beans and other vegetables.

Almost every holiday calls for it, as well as many days in between. The Tavce gravce recipe is simple to prepare and combines a few basic ingredients to create a flavorful meal.

Softened flat beans are baked with chunks of onion in a generous amount of sweet paprika just before they fall apart. It is a comforting, homey dish that pairs well with meat or can be enjoyed as a vegetarian meal on its own.

White bean casserole comes closest when trying to compare with the English dictionary, but Tavce Gravce is much more flavorful. This dish is basically white kidney beans cooked on a Tava (local skillet) and mixed with other vegetables.

White beans are the main ingredient in Tavce Gravce, including many other vegetables and sausage or pork ribs. It’s great winter food, and if you prepare it without meat, it’s suitable for vegans and vegetarians.

Nevertheless, if you plan to eat this dish in a restaurant but you’re a vegetarian/vegan, make sure to inquire about how it’s served.

In Macedonia, Tavce Gravce is the national dish that originated in the 15th century. Macedonians quickly became accustomed to eating it for breakfast on Fridays or during the Nativity and Great Lent fasts. You may still see Macedonian families eating Tavce Gravce every Friday, even today.

The dish is traditionally prepared with beans from Tetovo, which are some of the best beans you can find on the Balkan Peninsula, and if you ask a local, they’ll tell you that there are no beans like the beans from Tetovo.

Tavce Gravce originally included roasting the beans in a wooden oven. Still, even though this method lends a special flavor to the dish, the recipe has been altered to suit modern people’s needs and limited time.

A whole day is needed to prepare Tavce Gravce the traditional way! If you use canned beans, you will be able to reduce the preparation time, but the taste will not be the same and you will ruin the tradition!

It is not only Macedonians who are Orthodox Christians in the Balkan Peninsula. As a result, the dish became very popular in nearby Serbia, Bosnia and Herzegovina, parts of Greece and even Croatia, where the majority of people are Catholic.

You can find this dish under various names in different countries, such as pasulj/tavce na gravce in Serbia, grah in Bosnia and Herzegovina, prebranac in Croatia, and fasoulotavas in Greece.

It is a theme that has many variations. There may be some variation in the exact recipe depending on the region and the preference of the chef, but it usually includes beans, tomatoes, onions, peppers, and some spices. It’s traditionally a wintertime dish, although it can be eaten any time of year.

With the addition of sausage, Tavce Gravce becomes the ultimate comfort food. Served with vegetables and tender pork, this meal-in-one has a down-home taste sure to please your family and friends.

Take a pot, place in the beans and add water (about 2in/5cm above the beans). Allow the beans to soak for two to three hours.

Put new water in and add a tablespoon of sunflower oil. Pour a new set of water on top (about 2x the volume of the beans).

Be sure to keep checking the beans, stirring frequently, and adding warm water as the water evaporates. The beans should have a stew-like consistency.

Turn off the fire and let the beans soak in the mix for around an hour if you have the time. It does not have to be done, but it makes the beans softer and tastier.

Take out the leaves and drain the beans. Preparation of The Roux follows next:

Tava should be soaked in sunflower oil and heated.

Combine the sunflower oil with some red pepper (paprika) and mix until combined.

Pour some of the water out of the Tava and fill it with the beans. Only let the beans be covered by a thin layer of water.

Baking for one hour is recommended.

Add some fresh peppers (cut into half) to the top of the salad. Press them down so that they grill evenly.

Turn the heat up to 220°C/430°F for 5 minutes. Then after 5 minutes, add sliced onions, dried peppers and chopped parsley on top to garnish.

Serve it after 15 minutes of cooling and enjoy your meal! 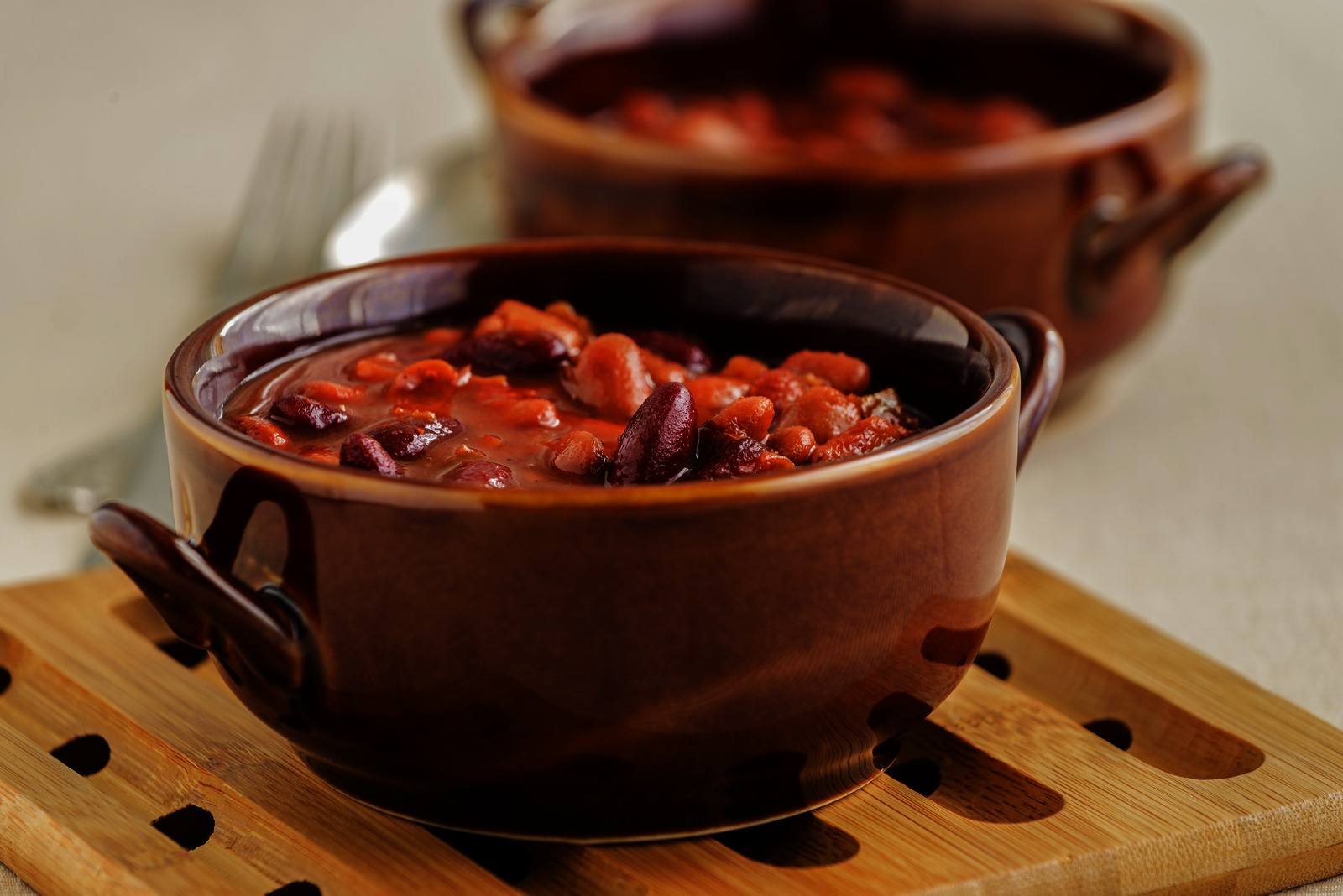 In the traditional Tavce Gravce recipe, the dish is served in a clay pot. It may seem strange, but this plate does not only offer a pleasingly rustic look, but it also enhances the taste of this delicious meal!

Tavce Gravce usually comes with sausages, pork ribs, sarma, zelnik, or pleskavica, or it can be eaten straight up with some white bread if you’re a vegetarian or you can combine it with another dish as a side dish.