If you are looking for a rich and flavorful Eastern European dish, then Piftija is a must-try!

This Macedonian Piftija recipe is especially popular in winter when people come together to remember their heritage and enjoy good food during the holiday season after the fasting is over.

It is not a typical dish, but it tastes fantastic and is worth trying if you ever visit Macedonia!

This is a recipe for the people who are a bit adventurous and not afraid of eating new, unusual traditional food! 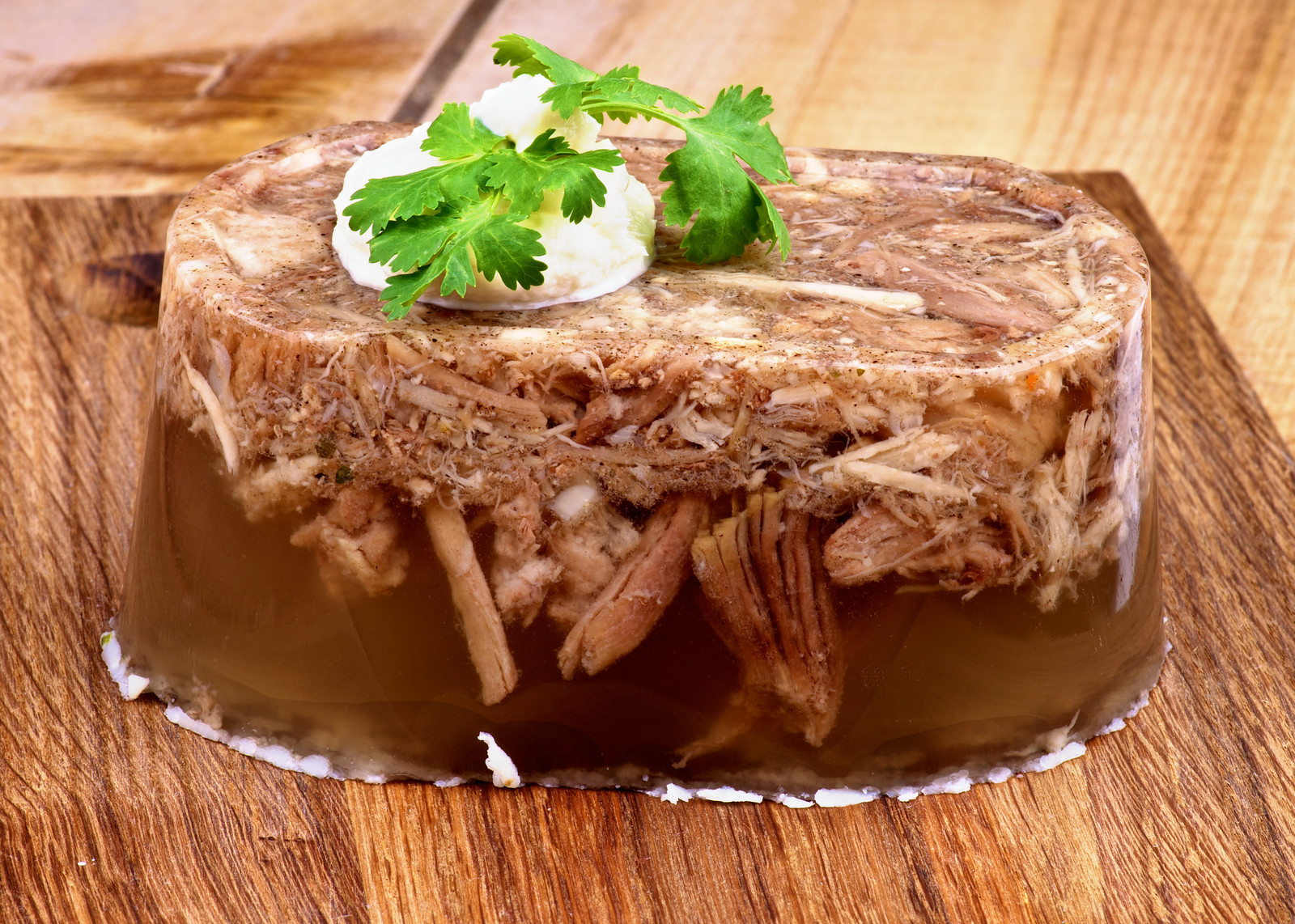 Piftija is a dish consisting of boiled meat with tons of seasoning! It has a soft, gelatinous texture and is often served as an appetizer.

It consists of very simple ingredients, but all the magic happens once cooked! The liquid in which the meat is boiled congeals because meat naturally contains gelatin and becomes this fantastic jelly-like, garlic-tasting treat!

This mixture is poured into a special tin container, covered with a towel and left overnight to cool.

There are slightly different recipes for this dish in every home, and some regions might add their spin on it. But, overall, Piftija is an effortless dish made up of boiled pork, onion, garlic, and spices—with some variations in filling, depending on the region.

Piftija is traditionally made with pork, but you can use other meat you prefer. This dish requires patience, so I recommend making a large batch and serving it over several days at room temperature.

Good old Piftija is an authentic Macedonian dish. It’s usually served during the cold winter months when all the fresh vegetables are gone. You will hardly see this dish on a summer table.

The dish originates from the time when meat was the only food available during winter periods. It is one of the oldest traditional dishes in Macedonia—coming from the time before cuisine was documented.

Aromatic, but not spicy at all, this meat stew is very popular in Macedonian homes! 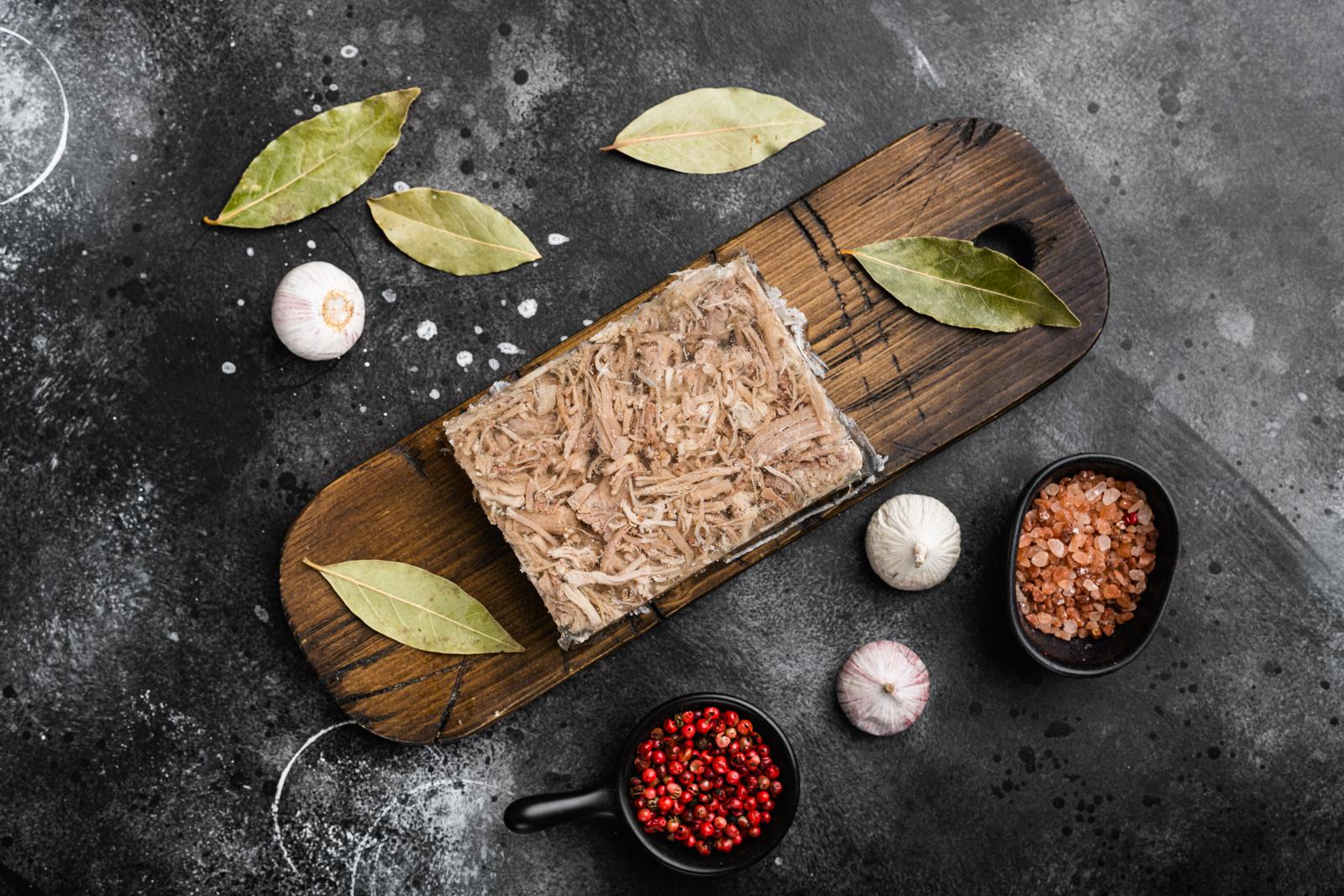 Rinse and place the pork legs and muscles in a 5–6 liter pot. Fill the pot with cold water and bring it to a boil.

The aspic should be kept clear by constantly removing the foam created during cooking. Then, add all the other ingredients and cook for 4–5 hours on low heat until the end of the cooking process.

When half or more of the water in the pot has evaporated, and the liquid has become sticky, the process is complete.

If you are unsure, place a few tablespoons of aspic in a small bowl, cover with plastic wrap, and refrigerate. Once the aspic has gelled, it should be ready.

Remove the meat from the pot and throw away the vegetables so you are left with a clear liquid.

Through a fine sieve, strain the liquid into a larger bowl. Allow the liquid to settle.

With a spoon, remove all the grease from the surface to ensure there are no white marks.

Put another layer of filter paper or a rougher paper towel on the sieve to strain the liquid one more time. This will make the Piftija crystal clear!

Take your garlic cloves and smash them to create a liquidy paste that you will later pour into the flavorful liquid. Next, pour water into the garlic to make it as watery as possible.

Add some salt and pour the garlic you just smashed into the liquid that you just strained.

The pork legs are prepared by removing all the meat from the leg, removing the membranes from the muscles and cutting them into pieces.

The meat is already boiled, so you don’t need any other preparation!

In one or more deep dishes, arrange the meat according to your needs and pour the garlic liquid over them.

Cover your dishes with towels on the top and place them in the fridge or a cold room so the gelatin can form and harden.

It should stay at least overnight, and then it’s ready to serve! 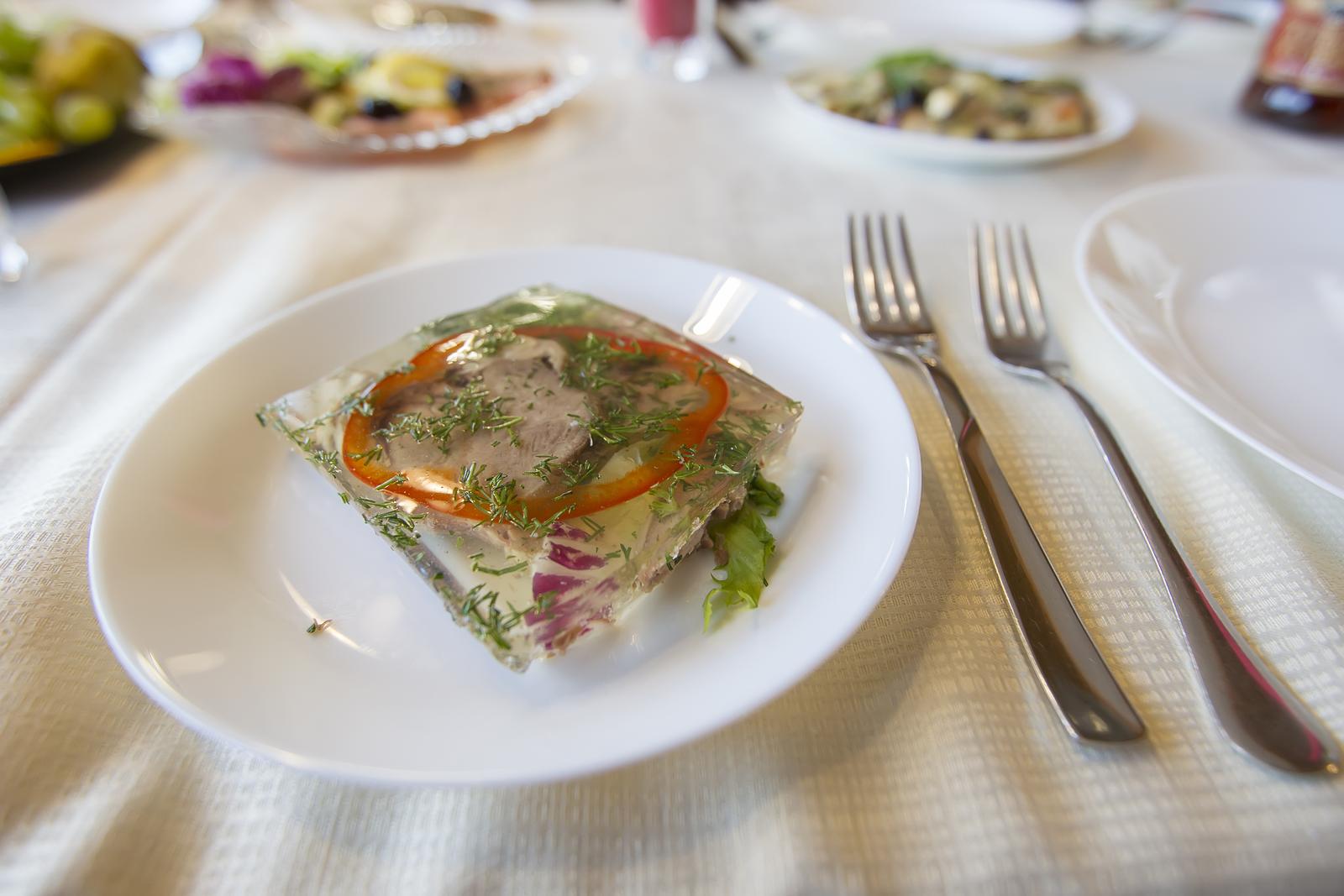 Piftija is a dish you will usually serve in the winter on every table in Macedonia, especially on Christmas Day.

It’s great to serve it as a starter before any big meal, like grilled meat, potatoes or Shopska salad!

Some enjoy eating it during their meal as a side dish or as a meze with a small glass of Rakija before filling up with the big Christmas lunch!

No matter at what point you decide to dive in, the result is always delicious!