Seems odd to stuff a pepper? Well, in the Balkans, stuffing peppers is one of the many ways to eat them and a popular traditional dish in every recipe book!

There are many varieties of stuffed pepper dishes in the Balkans, and they’re a specialty that is a staple and brings every family together.

This dish, called Punjene Paprike, is a lot of fun to make and eat. And guess what? Not only will it fill your stomach, but it will also fill your heart with warmth and love.

Punjene Paprike makes an excellent appetizer, or you can serve them as one of the main dishes during lunch or dinner. This a great recipe to enjoy any time of the year, but especially good when peppers are in season!

The Balkans love their stuffed peppers, and trust me; you have to try this one out. So let’s dig into them!

Punjene Paprike is basically a dish that consists of baked red bell peppers stuffed with fried and flavorful filling drenched in yummy juices.

The peppers are stuffed with mincemeat, rice and aromatic herbs, and boiled or baked until tender. As a result, your mouth will explode with flavors!

There is even a vegetarian version that skips the meat, and trust me when I say that they are equally delicious!

Also, people seem to have a lot of different ways of eating them. Some slice their pepper and eat it whole, some rip it open and mash it all together, and some even scoop the filling out, leaving the pepper behind.

Whatever your style is, the infused aroma of the pepper will leave you grabbing a second plate!

This stuffed pepper recipe is sweet and savory and brings out the flavor of the pepper! It’s not a complicated dish to make, so grab your peppers and get stuffing! 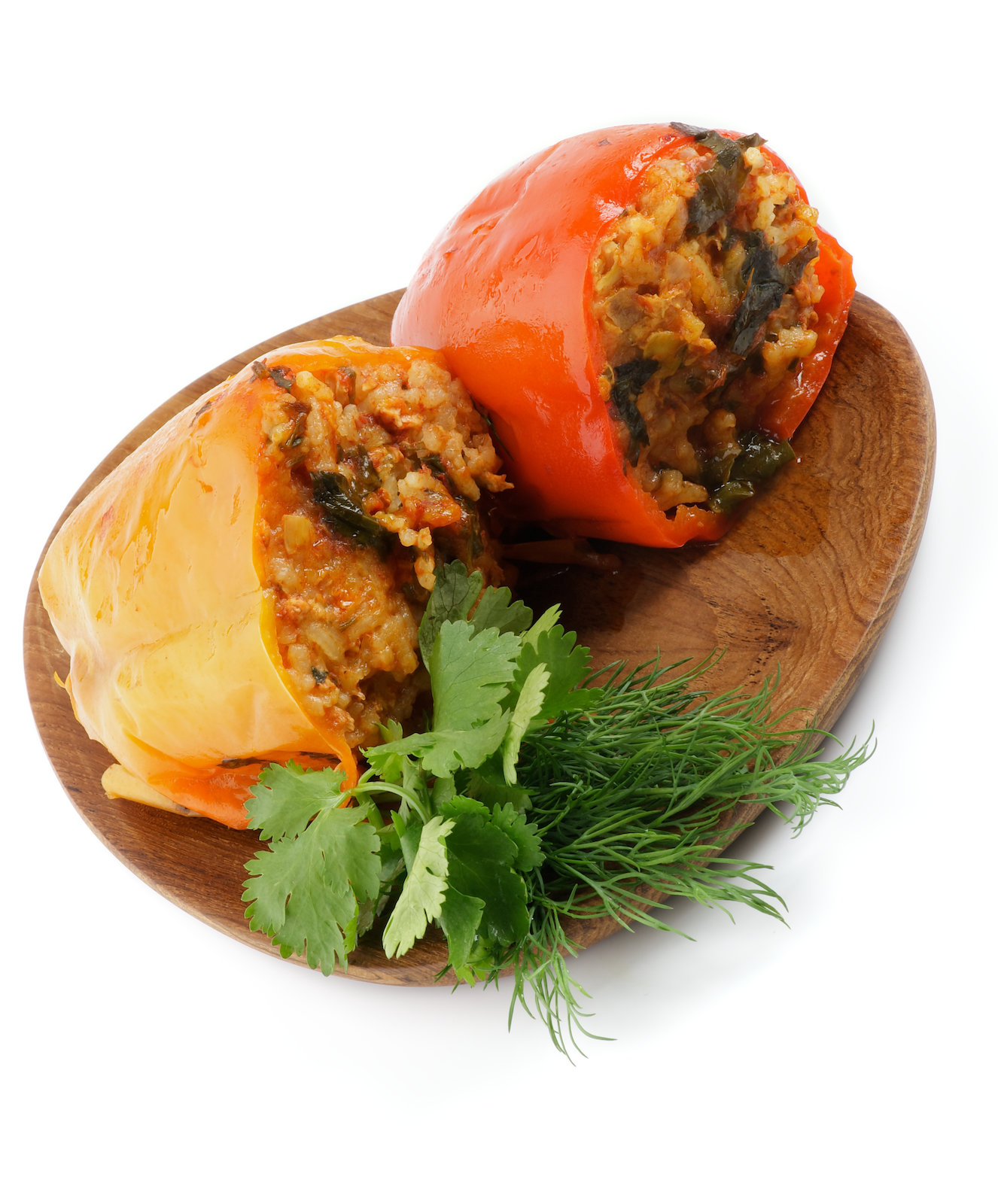 This dish is most prevalent in Croatia, which lies in the Balkans, in the southeastern part of Central Europe.

Stuffed vegetables like stuffed tomatoes, aubergines, courgettes, etc. are very common in this part of the world, and stuffed peppers are just another delicious example.

Many neighboring countries around Croatia have their versions of the recipe, referred to as Filovana Paprika (Bosnia), Polnjena Paprika (Slovenia), Toltott Paprika (Hungary) and Pulnena Piperka (Bulgaria).

Because so many versions and countries claim the recipe as their own, we can’t really say who thought of it first. But we can, however, admit that each one is exceptionally delicious and worth the try!

Whether you’re cooking for the whole family or just for yourself, stuffed peppers are pretty easy to prepare and store well in the refrigerator for up to a week!

With healthy ingredients, these stuffed peppers are an excellent option for those looking for a more wholesome meal but still want that traditional taste of the Balkans. 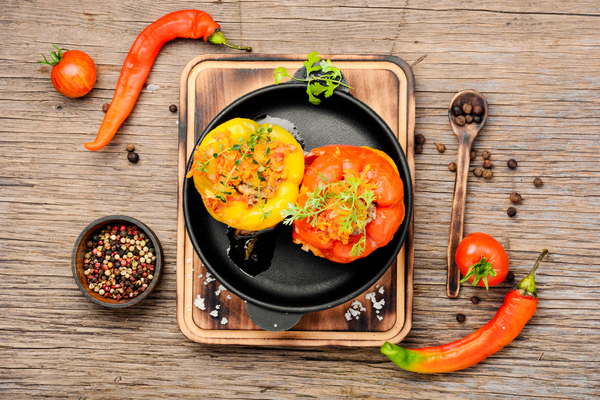 Cut the tops off 8 medium-sized peppers.

Using a spoon, scoop the seeds out and any stringy pieces inside, and discard them. After washing the peppers, let them dry upside down on a paper towel while you prepare the stuffing.

Heat oil in a large skillet over medium-high heat. Saute the garlic and onion in the oil. Then add the meat and seasonings, simmer until the meat is halfway cooked, and remove from the heat.

While your meat mixture is simmering, grab a small pot. Add the rice with water inside, and boil until the rice is halfway cooked.

Once it is done, drain and combine the rice with the meat in the larger pan and mix them together to combine them well.

Start stuffing your peppers with the mixture using a large spoon. Fill each pepper to the top with stuffing, but do not overfill it because the rice will expand and destroy each pepper in the oven.

Assemble your Punjene Paprike in a deep dish, and get them ready to bake.

Add 4 tablespoons of olive oil to another saucepan over medium heat and cook one onion, finely diced.

Pour 2 tablespoons of tomato paste, 2 cups of water and a pinch of Vegeta into the pan. Season with pepper and salt to taste.

The sauce should come to a boil as you stir continuously. Turn off the heat and slowly pour the sauce over the peppers when it is ready.

Pop the peppers in the oven for 60–75 minutes, and shake the pan occasionally to ensure that the sauce is evenly distributed. As the peppers cook, add more water if necessary. 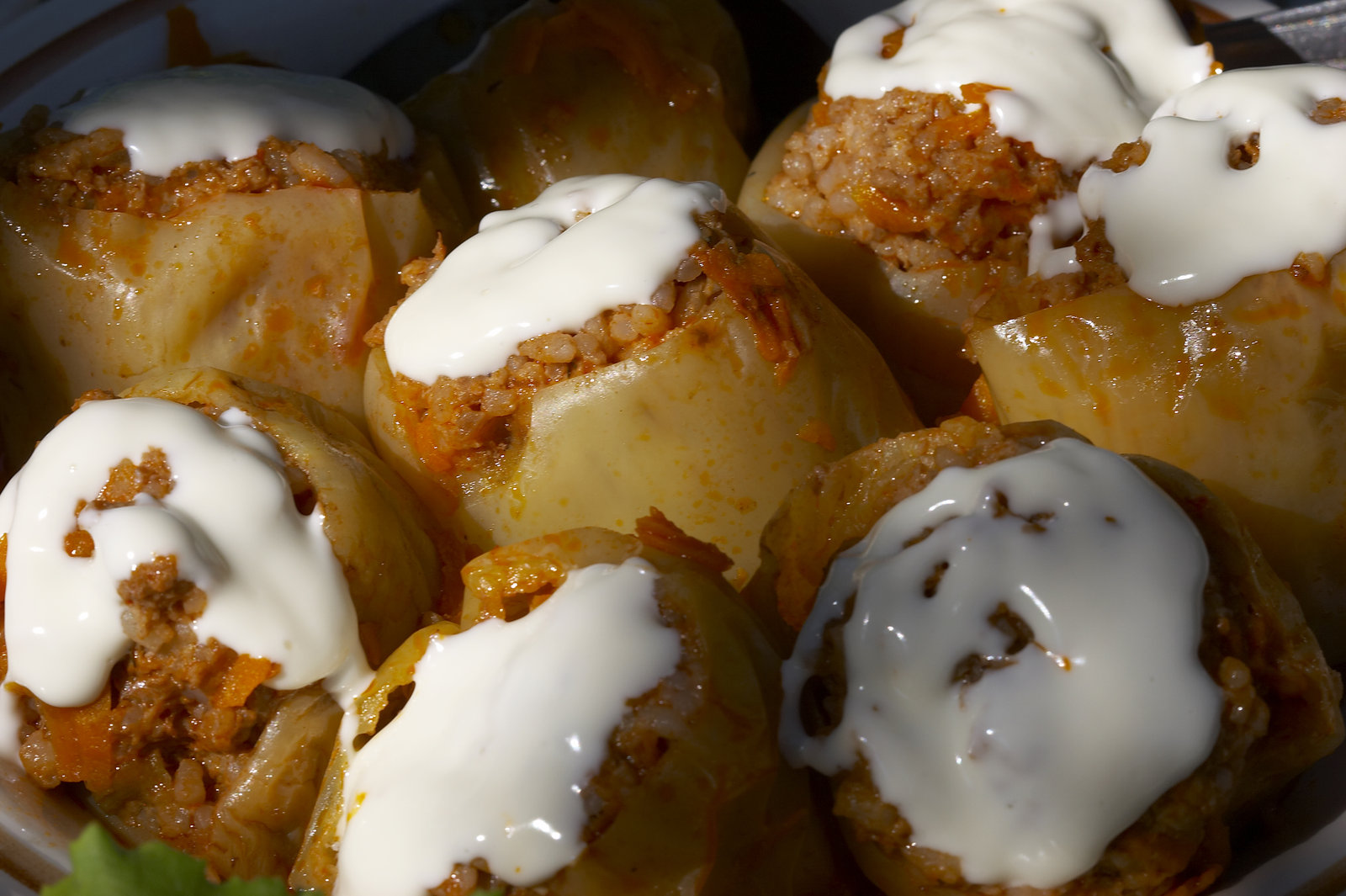 The smell of freshly baked Punjene Paprike will quickly spread and fill an entire room, calling everyone to the table!

It is best to serve this dish warm. Although it can stay in the fridge for almost a week, I don’t think anyone will be able to resist them that long!

It’s hard to resist a few of them on a plate with a scoop of sour cream on top and a piece of soft homemade bread, soaking up their juices.

Add a side of mashed potatoes or rice for some extra flavor, or enjoy them as the main dish next to a salad.

Either way, you will enjoy this delicious warm dish, no matter how you serve them. Take a deep breath and dig in for some unique flavor!